Agahozo Shalom houses over 100 survivors to the Rwanda genocide in 1994.  Agahozo means “a place where tears are dried” in Rwandan and shalom means “peace” in Hebrew. Originally this concept was used in Israel to shelter thousands of orphaned children who survived the holocaust.  This residential high school started in Rwanda thanks to an American woman who is the mother of three children of her own.  She raised $12,000,000 to start Agahozo Shalom and raised this large sum of money in only two years.  The goal of this high school is to prepare these survivors for the world outside Agahozo Shalom.  They supply the students with therapy and an education that will prepare 500 of them to continue on to a higher education to.  They are taught the importance of serving their community and helping others.  Teaching the next generation that peace is the way and that helping the people around you is of the upmost importance.  If the mindset of the upcoming generation changes, and the prejudice towards their neighbors is turned into love the world will be a better place.  Although this school is just one small step to mend the minds and hearts of survivors it is a major step for each of these student’s lives.  The provided education and safety for these children will allow them to reach their dreams which looked like a dim future for them during the genocide. This school creates opportunities for these children that otherwise would not be available for them. 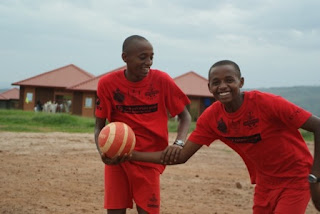 General Romeo Dallaire: head of the UN peacekeeping in Rwanda.

25,000 lightly armed troops to keep the peace (all of them knew little about the Hutu and Tutsi past).

January 1994:  Dallaire gets information that genocide is being planned.
Dallaire then informs the UN.

Dallaire ordered NOT to use force.

Magadishu, Somalia.- two black hawk planes were shot down, and 18 US marines were killed most of the deaths were a product of torture.

US does not want to get involved in ethnic conflicts in Africa again.

Carl Wilkens:
- American missionary, only american to stay in Rwanda during the genocide.

April 6, 1994: The Hutus president's plane was shot down (no one knows who fired the shot)
there was a crisis meeting that night.

Hutu extremists kill 10 Belgium pulls support from UN peacekeeping mission.
Posted by Mugire Amahoro - Have Peace at 7:03 AM No comments:

In the convention, genocide means any of the following acts committed with intent to destroy, in whole or in part, a national, ethnical, rasial or religious group, as such:

1. killing members of the group
2. causing serious bodily or mental harm to members of the group
3. delibertly inflicting on a group conditions of life calculated to bring about its physical destruction in whole or in part
4. imposing measures intended to prevent births within a group
5. forcibly transferring children of the group to another group

Following acts shall be punishable:

Every UN member nation has promised to intervene and stop genocide. Wherever and whenever it occurs: 1948
Posted by Mugire Amahoro - Have Peace at 6:29 AM No comments: